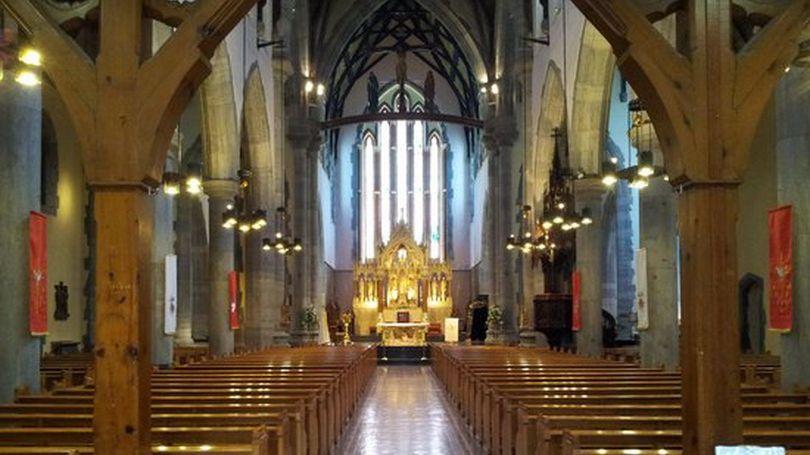 The Cathedral of St John the Baptist is the present day Cathedral in Limerick City. The Cathedral has one of the highest spires in Ireland at 265 feet and 9  inches from the base of the tower to the top of the Cross.

St. John’s Cathedral was designed by the English architect Thomas Hardwick and its foundation stone was laid in May 1856. By March 1859, the building had been roofed and the adminstrator, Fr. Burke was privileged to celebrate the first mass in the new cathedral.

The Limerick firm of Messrs. Hennessey was commissioned to design the tower and it was completed in 1882. The cathedral was officially consecrated by Most Rev. Edward Thomas O’ Dwyer in June 1894. Three major programmes of reconstruction have taken place, one in the 1950’s and the second beginning in 1977. The third major restoration of the cathedral was completed by Dr. Donal Murray in June 2003 and took two years.

The cathedra or bishop’s chair and the stalls were carved in Munich in 1894. The cathedra was placed in the centre of the apse, framed by the reredos of the high altar. The finely carved back and canopy of the cathedrais now situated in the cathedral’s north transept, housing the oils used in the sacraments of baptism, confirmation and the anointing of the sick and blessed during the mass of chrism on Holy Thursday.

The table itself is of Limerick marble, and the substructure of alabaster and coloured marble, adorned in the centre by a group, carved in pure white alabaster, depicting the sacrifice of Abraham.

The tower was designed in1878 to stand at 274 feet 9 inches feet, on a base with walls that are some four feet thick. The spirelettes which stand guard at the top of the tower and at the base of the spire are themselves thirty feet high. The limestone for the tower was quarried at Rosbrien. The tower is one of the tallest in the country and from each approach to the city of Limerick, the spire presents itself, standing out against the horizon or nestling against the backdrop of the Clare hills. Floodlighting was installed in 1986 and replaced during the restoration in 2003, bringing a new visual dimension to the city by night.